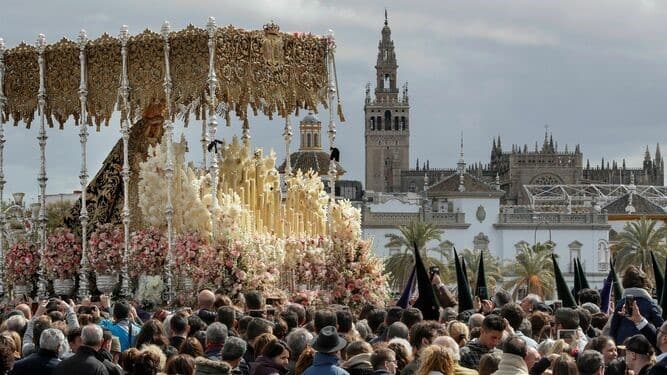 This guest post is written by Sonia Beck. Sonia was born in northern England, but at age 10 moved to Spain and then Belgium, and according to her “life was never the same again.” A life-long love affair with languages and all things European followed. Sonia has been a tour manager with ACIS since 2000 and is also an accomplished performer, having worked in theater, film and more.

If you have never been to Seville then Semana Santa is a once-in-a-lifetime experience. However, a word of warning. You will not see tourist Seville with its lazy streets, secret tapas bars, eclectic museums and mansions. For just over one week a spiritual mania takes over (or at least after 12:00pm) and the city is focussed on one thing alone—the processions.

The tradition of Easter week in Andalucía goes back to the 15th Century and some say much earlier than that. Seville wears its Catholic identity on its sleeve at the best of times, with every street corner boasting a saint of Madonna in azulejo. The holy week processions are there to mark the passion of Jesus Christ in the week before Easter, but also to give vent to the church’s innate theatricality, and to Andalucía’s intrinsic sense of drama. Prepare for a riot of sound scent and spirituality.

Up to 70 religious church brotherhoods participate in these processions, which exist to transports giant floats along the official route between their neighbourhood church and the Cathedral, where the cortege is blessed before returning home. This journey is supposed to approximate the journey that Christ made with the cross to Calvary. If I mention that the floats or pasos weigh over a ton each and that the whole procession can take eight hours to complete, then you will have some idea of the supreme investment and effort on the part of the participants that goes into this one event.

For ten days the city is given over to the processions and not much else matters, with rehearsals by each brotherhood taking place for months beforehand. The floats are carried by up to 40 costaleros (or bearers), effectively working blind during their ordeal underneath the platform and only protected by padding that they wear on their heads to carry the weight.

The various elements of a procession are as follows; a giant cross carried front of the procession is followed by the Nazarenes, or penitents. The Nazarenes are an eye-catching element, in their floor length, colour-coded capes and giant conical hoods. These alarming sight has many different interpretations, some say the outfits echo the cone-shaped hoods that the condemned were forced to wear by the Inquisition as they were lead to their deaths, others say that they represent a striving upward towards the heavens, but that they are also the shape of cypress trees that traditionally adorn burial sites, representing eternal life. Take your pick.

Next at the heart of the procession come the floats, decorated with flowers and candles all on a sea of gold or silver and hotly anticipated by the waiting crows. Each float carries a statue – either of the Virgin Mary or Jesus in various guises of grief, sacrifice or contemplation. Carved in wood, they are priceless works of art in their own right. Some date back to the 16th Century and locals have a deeply emotional attachment to the figures which belong to their own church.   Warnings of rain will bring many to tears at the thought that ‘their’ statue might not be able to come out that year, as will the first sight of the Madonna triumphantly emerging from the church at the start. Behind the float a brass band  plays a solemn lament and their drumbeat keeps the costaleros moving in step. Behind them dozens of young boys and girls carry incense, candles and lanterns followed by another group of (non-hooded) penitents carrying rows of wooden crosses.

It is, in short, a masterwork of planning. With hundreds, even thousands taking part in each procession the timetable is a work of science. At some point in the day several floats might cross paths in quick succession creating giant bottlenecks and making it impossible to move . As in any theatrical production the public have a role to play. Strict rules about where you can stand and how to behave apply.

One of the most heart stopping processions is the ‘Silencio’ – a dusk procession completed in total silence, apart from the flamenco lament or saeta sung from one of the balconies when it stops below. You really wouldn’t want to be the one screaming out for ice cream or answering a mobile phone at this stage!

Pack plenty of patience – there are timetables and routes published, but to be frank Seville is a labyrinth at the best of times, and planning a safe and empty route home is always a challenge. Never push in front of someone’s viewing spot, and beware crossing the path of the procession until instructed – unless you want to feel the wrath of 200 silent hooded figures bearing down on you!

Mostly just listen out for the distant rumble of drums, footsteps and trumpets and head towards it. There you will be able to witness the intense ritual and suspense of the whole thing as it painstakingly passes– and then, repair to a corner café to recover with a large slug of ice cold sherry. Salvation!