From the moment I jump in the cab, there is a sense of gradual transition as you journey into this incredibly beautiful city filled with dust, cracks, and occasional garbage bags. It’s all here.

For me, it begins as we pass the Sheraton Hotel. Out in the distance is Esposizione Universale Roma (EUR), a 1930’s modernist vision community of how Rome should be in the new world. It didn’t really work out that well but it left us some interesting buildings and now a trendy neighborhood with parks and metro access to both the beach and the center of town. That’s the other thing about Rome – it’s a beach city. The Roman port of Ostia is connectible by metro from the beach resort through Acilia and trendy living areas of Rome to the Colosseum.

Then for me, the real transition begins. The first sight of any significance is the white marble Pyramid of Cestius outside Porta San Paolo gate. Then you make that turn up the Aventine Hill with the Palatine Hill facing you. Residential palaces in pink Roman stone look down on the vast field of grass that is the Circus Maximus, one of the largest arenas in the world during roman times.

It becomes frenetic and exhausting at this point with ancient fragments popping up every second it seems. The right turn at the bottom of the hill takes you by the Bocca della Verità (The Mouth of Truth). Opposite from that, there is a Greek temple, then a Roman temple and as the roads start to move around, you start to see what looks like the Colosseum but in fact is Marcello’s amphitheater, the Teatro di Marcello. Behind that is Octavia’s portal and the Jewish ghetto. On the right side lies the most glorious juxtaposition of stairways anywhere. There is the very subtle Capitoline Hill Stairs, the Cordonata, right next to the severe and steep medieval stairway that leads to the Basilica di Santa Maria in Aracoeli. On the right-hand side beyond the stairways is the slightly incongruous, but ever faithful tourist site for lost travelers, the 19th-century wedding cake built to commemorate the unification of Italy in 1870 named the Vittorio Emanuele monument.

We are now in the Renaissance period with the Piazza Venezia with Trajan’s Forum on the right and I have disappeared into Rome before even my first cappuccino.

I am in two minds about graffiti. Sometimes it is just senseless destruction of beautiful facades but more and more it gives voice to a neighborhood in change and transforms organically into art from Banksy and beyond. Graffiti stretches back through the ages. It comes from the Italian word “graffiato” which simply means scratched. It really starts like a primitive text message that hasn’t been deleted or expunged from the memory of the ages and it pops up on everything, especially Roman (usually with a clear statement and cause). It is found in Egypt, in Pompeii, in the ruins of Greece and Turkey, and in the tiny odd corners of Rome.

Recently in Rome, I took a little excursion based on an article I read in one of my favorite magazines, The World of Interiors. I headed to Testaccio which is close to the Protestant cemetery where Keats is buried and the Pyramid of Cestius by the Porta San Paolo. The pyramid is actually the only surviving Egyptian pyramid in Europe. It was built around 18 BC by some mad egomaniac who thought he was a pharaoh. Ego was in high supply during that period. 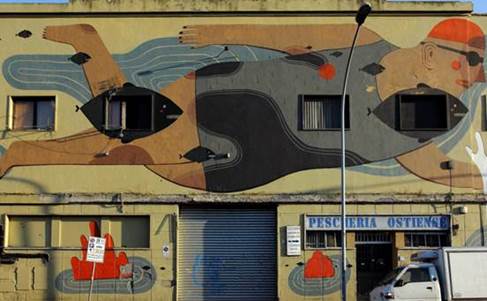 Testaccio, the Roman neighborhood that sits just behind the pyramid, is going through a bit of a Renaissance. New restaurants are popping up around what used to be the ancient Roman rubbish heap on the Eastern banks of the Tiber, now known as the Monte Testaccio. It developed some notoriety in the 1950’s when the filmmaker Pauolo Pasolini sat at the top of this rubbish heap of remnants of old roman vessels that carried olive oil for a photograph. Now, this area is a mix of trendy, bohemian, and authentic Roman.

My friend and fabulous Roman guide, Carlotta Boldrini, lives around the corner from here. Her hood now boasts a new painter on the block. The article was about these huge murals by Augustino Iacurci. While former markets and factories in Ostiense and Testaccio are transforming into trendy, gentrified eateries, cafes, bars, and apartments, this wonderful artist has pulled together the scruffiness and the neglect of a rundown neighborhood in the process of change and intertwined it with his sensational murals.

“As an artist, working outside deprives me of that air of sacredness that you associate with works in a museum,” he says.

Agostino takes on the role of integrating his art into the neighborhoods in spectacular fashion. His art is big and sits above everyday Rome with warts and all. His murals are as offbeat as a swimmer with cap and goggles above a fish shop. His equipment is simple: A sponge roller, a cherry picker, and simple masonry paint. One day maybe some 2,000 years on, we will find some faded fresco by a huge skyscraper near a tiny pyramid and lament that Rome was once a city that you could walk around and get a decent coffee in a neighborhood bar.

What are some of your favorite parts of Roman urban culture? Let us know in the comments section below!

4 Photo based activities to do with your students and enhance your curriculum.

“In 1978, Peter Jones founded ACIS with a few colleagues, who all believed that travel changes lives. Knowing the important difference between a trip that’s mediocre and one that’s extraordinary, he built ACIS from a deep belief and understanding that ACIS group leaders and participants deserve the best—from itinerary development to hotels to perhaps most importantly, the people hired to guide teachers and students throughout the journey.”
Graffiti in RomeRome Street Art