This is the sixth in a series of articles profiling destinations new to our 2017 catalog. This post was contributed by ACIS marketing intern Jeff Zeserson.

One of the most thrilling aspects of travel is you don’t have to go far to experience something new and exciting. Canada, our neighbors to the north and a place a lot of people overlook when planning trips abroad, offers unique cultures just as rich and steeped in history as any in Europe. Take the region of Québec, the second most populous province in the country and one that is home to four different living cultures. Here, you will find Native Canadians, French, British and the Québécois. The majority of people in this region predominantly live in the urban areas along the Saint Lawrence River between Québec City and Montreal. 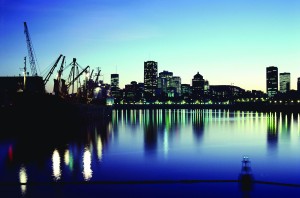 Québec City, the capital of the region, is one of the oldest cities in North America and all the history that comes with it makes this a must-see when going north of the border. Québec comes from the Algonquin word Kebec, which translates to “where the river ends”. The city is located in the Saint Lawrence River Valley on the north bank near where the Lawrence meets the St. Charles. The ramparts surrounding the section of Old Québec are the only fortified walls remaining in the Americas north of Mexico and were declared a World Heritage Site by UNESCO in 1985.

The remaining fortified walls are a nod to the city’s past, which has seen many wars, occupations and inhabitants. Although founded in 1608 by French explorer Samuel de Champlain, fellow countryman Jacques Cartier built a fort where the city stands today about 70 years earlier. The ramparts were built with good reason. Québec acted as a makeshift headquarters of many raids against New England during the French and Indian Wars and was the site of three battles during the Seven Years’ War. During WWII, two major conferences were held within the city where world leaders such as Winston Churchill and Franklin D. Roosevelt strategized. Significant parts of the D-Day landing plans were made during these meetings.

Take a ferry along the majestic Saint Lawrence River and witness some of the history come to life. See La Citadelle, the centerpiece of the ramparts surrounding the city and a destination that attracts over 200,000 annual visitors. It is the oldest military building in Canada and a National Historic Site. Move on to the Plains of Abraham and learn how one battle here altered the course of Canadian history. On September 13th, 1759, fewer than 10,000 troops between the British and French clashed in a pivotal battle in the Seven Years War, which ended in a decisive victory for the British. Finally gaze on the Chateau Frontenac, another Historic Site. It dominates the city skyline and is recognized as the most photographed hotel in the world. 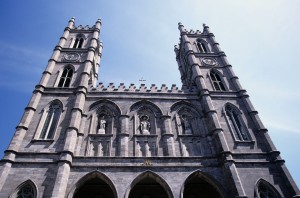 Travel about 150 miles down the Saint Lawrence and arrive in Montreal, the largest and most populated city in the Province of Québec. As is with Québec City, the official language of Montreal is French making it the second largest primarily French-speaking city in the world behind Paris. The city was originally called Ville-Marie or “City of Mary” for Mount Royal, the triple-peaked hill in the heart of Montreal. Montreal was the industrial and financial center of Canada for over a century and a half and is home to 50 National Historic Sites, more than any other city in the country.

Montreal’s most important and impressive religious site would be La Basilique Notre Dame, a basilica in the historic district of Old Montreal. The church boasts Gothic Revival architecture that is among the most dramatic in the world. Opened in 1823, it has been visited by Pope John Paul II and hosted Celine Dion’s wedding in 1994. Another site of architectural boldness is the Golden Square Mile, an urban neighborhood in the ‘Uptown’ or ‘Newtown’ part of Montreal. The name was given to this area, which was developed mostly between 1850 and 1930, after the 1930s. Unfortunately, after abandonment and demolition from WWII the neighborhood has been changed beyond recognition.

These two francophone cities serve as the anchors of Québec and offer culture, cuisine and architecture that is unique to the region. Je me souviens. The official motto of Québec translates to “I remember”. Travel to this culturally rich region and it will be a trip you never forget.

Check out the complete itinerary for Cultures of Canada, our tour featuring visits to Québec City and Montreal!