This guest post was contributed by Academic Travel Advisor Nicolette Miller upon her return from the ACIS Global Teacher Conference in Reykjavik, Iceland.

We landed at 6:15 am Reykjavik time and boarded the Flybus Plus to take us into town. After switching buses once, it took us to our hotel, Hotel Reykjavik Centrum, in the heart of downtown Reykjavik. It was dark as we arrived, as the sun does not rise at this time of year until around 11 am and sets around 4 pm, allowing 5 hours of daylight. The hotel is built on 2 old Viking longhouses and the recent renovation marries the historical with the modern in a charming way. Amazingly, our room was ready when we arrived at 8:30 am w/ACIS staff on hand to greet us and welcome us. It was delightful to see Lynn Freeman and Alicia Fortier again and to meet our Tour Managers, Libby and Giacomo.

After freshening up, we headed out to eat breakfast at The Laundromat Cafe in downtown Reykjavik. We were joined by the Greens, another couple at the global conference and had a delightful breakfast of blueberry pancakes and caramelized bananas. We spent some time poking into shops, admiring the beautiful Icelandic sweaters and warming up! We also toured Harpa, the stunningly beautiful newly built opera house with outstanding architecture. Photographing the scenery through its ice prism-like windows is a photographer’s dream. We also went up in Hallgrimskirkja Cathedral where a panoramic view of Reykjavik is to be found. Its architecture mimics the basaltic prism-like lava flows to be found on the southern shores of Iceland. The Icelandic people are so charming and endearing and welcoming.

That evening ACIS held a dinner reception at Salt. It was a very eclectic buffet of Icelandic dishes, such as whole salmon, seafood terrine, 3 types of whale and shark, salad and vegetable soup. We were warmly welcomed by the ACIS staff. We learned that many adventures awaited us tomorrow. 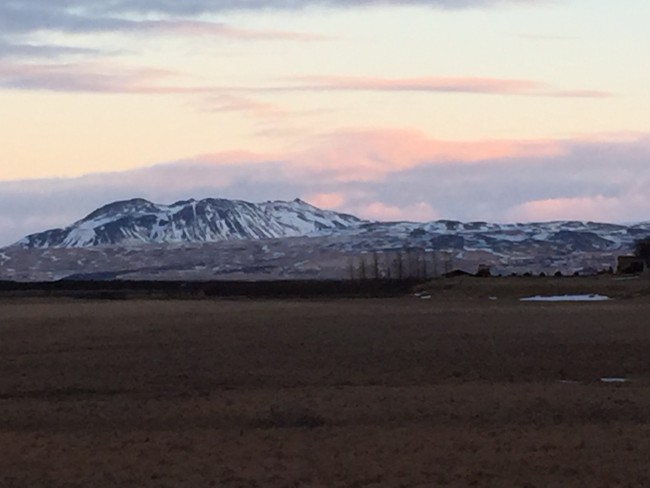 We left the hotel in the dark today at 8:30 am after a hearty breakfast at our hotel. Thanks to geothermal energy, our hotel and showers are very warm and comforting from the cold outside. Yesterday it was around 15 degrees F with a bitter wind chill from the wind coming off the Arctic Ocean, making it much colder; today, not so much wind and 30 degrees F. Driving along the ring road and the south coast, we were driving along the south through the lowlands. We were going to see the volcano, Eyjafjallajakull, at 15,000 feet. Iceland at one time was entirely covered by a glacier and when most of the glacier melted, the mountains were carved out and remained. We were passing many herds of Icelandic workhorses, and they stay outside all year. There are competitions of these Icelandic horses and once they leave the island, they cannot come back due to the diseases that they would introduce.

We saw the waterfall Seljalandsfoss, where Justin Bieber filmed a music video. Many much more important events took place here as well, and this is the region of the best known of the Icelandic sagas, Njal’s Saga. I read portions of this saga before coming and it’s basically a medieval Nordic soap opera with too many threads of drama to keep straight. Next, we stopped at the waterfall of Skogarfoss (each waterfall or foss is increasingly bigger) and admired for its natural beauty and force.

Our next stop was the black sand beach with the basaltic lava flows. These lava flows with their sharp edges in a perfect hexagon were amazing. The haunting rock structures offshore are part of the many legends of the trolls of Iceland. My souvenir was a smooth basaltic stone, purported to have magical powers coming from this beach. It will be part of a troll and fairy garden, which I intend to create.

Then we visited the farm that resides in the shadow of Eyjafjallajökull, the volcano that erupted in 2010. The family that lives there has created a visitor’s center where we watched a video of the eruption and watched the devastation and change to the family and farm. Their recovery from the eruption of the volcano and how they have turned destruction into profit and education is interesting. You can even buy every lava product imaginable! Yes, of course, there is a gift shop!

After arriving back to Reykjavik, we ate a quick sandwich before leading out to see the northern lights. They were not showing themselves for the 3rd night in a row and it was disappointing. Apparently, this whole northern lights thing is very elusive… 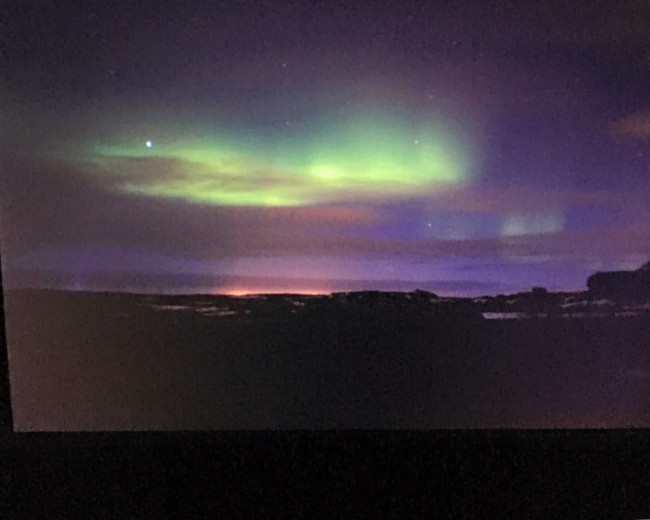 We started the day at 8:30 am (and this was to be one very busy day going non-stop until 1:30 am), by visiting the overlook to the valley where we had stood the evening before to watch the northern lights. This is where the 2 tectonic plates of North America and Eurasia have separated. The newly formed land between them is the result of the magma that seeped up through the cracks and dried. It was hauntingly beautiful, old and majestic. Personally, that scene will be my Christmas card photo for next year. What an anecdote and symbol of hope for the difficult times in our lives! It was also bitter cold here due to the wind, but what an experience to be walking around on two continents!! This was also the site of the first parliament meeting in 930AD of all the chieftains of Iceland.

Next was Fontana Springs. We went in the geothermally warmed outdoor spring pools in our bathing suits in 30-degree weather. Then we ran into the glacial lake. After returning to the warm pools, I felt needles in my legs and an incredible exhilaration. Afterwards, I felt so warm and relaxed with a sense of well-being. Apparently, this is a very regular ritual with the Icelanders as they promote healthy practices such as these to fight Seasonal Disorder Syndrome with the dark winters. We sampled rye bread that had been baked in the ground in a geothermal hot spring for 24 hours. It was delicious and amazing!!

Afterwards, we headed to the Geyser and saw the steam rising from the ground and watched the geyser erupt. We enjoyed a typical Icelandic lunch at the restaurant. The restaurant was dedicated to Icelandic wrestling and the success that they have had in the Olympics with Roman Greco wrestling, depicting wrestling with sculptures and videos.

Next in our perpetual itinerary was a visit to Gullfoss waterfall, a huge waterfall similar to Niagara Falls. It was stunningly beautiful, but the wind was so bitterly cold that you could not stay on the overlook for long. The wind was so strong that my camera would not open until I sheltered it from the wind.

Afterwards, we stopped at Fridheimar, a world-renowned farm for Icelandic horses as well as a huge greenhouse where they raise tomatoes, herbs and cucumbers. We saw an interesting outdoor demonstration of the 5 gaits of the Icelandic horse. It was an interesting look at the ingenuity and resourcefulness of the Icelandic people. We were treated by ACIS to their freshly baked bread and homemade tomato soup. Their tomatoes were truly the best that I had ever eaten.

Our big adventure was not over, as, after an hour of driving, we began our off-roading saga!! We started up steep dirt and ice paths up a mountain to an overlook to get a view of Reykjavik. We were in these huge Super Jeeps with giant tires, a Ford F 350 and an Excursion fused together!! Monster trucks!! We were in a convoy of 6 trucks. As we were cresting the mountain, the lead Jeep went into a 30-foot slide backwards and our off-roading excitement had to abort due to too much ice.

Due to a tight schedule, we had to return directly to the restaurant for another meal of lamb (our third…..lots of sheep on the island!) with the island delicacy of fermented shark and dried fish as appetizers.

We rushed out after dinner to an excursion that night to see the northern lights. We successfully saw them that night, which was thrilling!! We had waited for 2 hours then loaded back on the bus to return, then they began and we unloaded from the bus to watch them. The camera captures them much better than the naked eye.

The following morning we slept in, had a delightful breakfast, toured the Reykjavik city museum next to our hotel and shopped briefly for gifts. We finished our stay in Reykjavik with a light lunch of green tea with jasmine and a savory crepe with avocado, mozzarella and mushrooms. On the wall of the kitschy crepe restaurant, an intriguing painting was of a woman with two faces, a white horse wrapped around her as to appear to be her cape or fairy wings. The volcanic earth teemed with trolls and elves coming out of the ground. The painting spoke to me as a symbol of Iceland, her haunting and deceptive beauty and her mystery and magic.

If you’re interested in learning about how to qualify for an ACIS Global Conference, check out our rewards for teachers page!

5 Steps to Planning an Educational Tour

Leading an educational tour is easier than you may think. In this free guide
we’ll walk you through the 5 essential steps to becoming a group leader.