The British Isles may be relatively small on the global scale of things—have a look how many times you could squeeze us into the land mass that is the U.S., for instance. However, within these islands we certainly have a remarkable variety of landscapes…of everything, we’d like to think (except slithery things that bite and other predators—we don’t do those, happily!) Amongst the most dramatic and beautiful parts are to be found in northern Britain: Scotland.

From the rolling hills and farmland of the Lowlands on its southern flank, albeit with a touch of bleak moorland as it borders England at the top of the Pennine range (the ‘backbone’ of England); you can pass through the so-called ‘central belt’ that hosts the nation’s two great cities, Edinburgh and Glasgow. In these you have, no more than an hour apart, two wonderfully contrasting cities, exuding their individual vibrancies and born of different heritages: medieval history and industrial power. Each could warrant individual blog time on its own merit…

But the real beauty of Scotland lies in its landscapes—a land formed millennia ago by the ructions of the earth and moulded by the ice sheets of the last ice age. To experience its variety and dramatic beauty, there’s only one thing to do: get yourself amongst it! And best for that? Point yourself north!

For those of you who sat in your local multiplex watching the latest 007 movie, ‘Skyfall’ (Daniel Craig, Dame Judi Dench, Javier Bardem (boo hiss), you will already have had a preview of what is to come: picture in your mind the landscape of those penultimate scenes of the film as 007 and ‘M’ hide out and await what is to come.

Go North, My Friend—Discover the Land, Understand the Nation

The central belt is, in reality, a rift valley; land that has dropped between two great fault lines spanning the width of the country. This is something that is only really apparent when looking at a map of the British Isles with contours or the uplands and lowlands detailed. To travel beyond this region, you will discover mountains and valleys scoured and moulded by the great ice sheets of the last ice age and guaranteed to take your breath away.

To leave the central belt behind heading north and to do so from the ancient city of Stirling, you are passing from the point where, for centuries, the kingdom of Scotland could be controlled: the ‘brooch which clasps together the Highlands and Lowlands’ as it has been poetically referred to. This is the point at which the transport routes of the nation for long time crossed before the Firth of Forth further east was ever bridged by modern man; and the point at which a 360 degree view from its ancient castle ramparts can take you from rolling countryside to mountains to river estuary.

Not surprisingly much history of Scotland, of Britain as a whole, has found itself at this spot: Scottish Kings; William Wallace aka ‘Braveheart’; Edwards I and II of England; Robert the Bruce; Bannockburn 1314…what movie fodder! 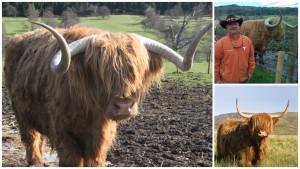 [Hamish, local character! Right Top: Hamish is the one without the hat; Right Bottom: One of Hamish’s cousins  Photos: (left/bottom right) Flickr]

Don’t forget to call in on Hamish the Highland Cow as you pass through the wooded hillsides and farmlands of the Trossachs. (If you were wanting to try out your local dialect, that’s pronounced “heilan’ coo” by the way.) As one of the local characters, he’s always worth a ‘hello’! But rest assured you should see more of his ilk as you head north: ideally suited to the climate here, with their adorable shaggy coats for warmth, dark eyes peering from beneath a low hanging fringe (yes, you might wish to send them for a haircut if any was your rebellious teen!) and ‘this is what you call a pair of horns’ horns. To use human analogy, let’s simply say these are true characters and bovines you’d be happy to bring home to your mother!

From the lusciousness of the Trossachs you are on a journey of anticipation towards the might of the Highlands. The existence of Man thins out to small settlements and the might of nature dominates. From glens with the freshest of rivers running through them; pasture with sheep and more of the locals (Highland Cow!—remember your pronunciation), your views will be also dominated by increasingly soaring peaks amidst breathtaking glacial landscapes (U shaped valleys, waterfalls, lakes). Roads will rise and wind; occasional passes speak of the extremes of weather as snow gates stand guard and verges are marked out by snow poles.

The Highlands: On Top of the World? 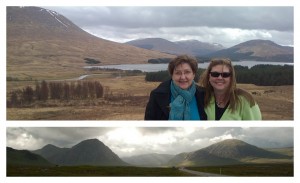 [Getting amongst it all! Top: Bridge of Orchy towards Rannoch Moor;  Bottom: crossing Rannoch Moor  Photos: (bottom) Flickr]

Rise up to Rannoch Moor and it can seem as though you’re on top of the world, a water-pitted moorland landscape of rough grass and intermittent shrub ringed in each distant view by the Highland hillsides and lurking mass of lower mountain slopes. In a small island of some 63 million people, as we are, it can be hard to believe such dramatic wilderness can still exist—but it does! (yet it announces itself not, until you’re upon it).

Descend through the spectacular Glencoe, where to spy rock climbers testing themselves against the might of the rocks helps you truly appreciate not only the scale of the landscape before your eyes but man’s insignificance against it. Throughout this landscape, moods are set as much by what you see as the vagaries of the weather—clear skies and sun throw the drama of the terrain into full relief: trees and shrubs in various shades of green and brown high up, close to the tree line; the contours of the jagged rock faces; occasional waterfalls hanging high and cascading water onto the rock faces below. Yet cloud can swing in and descend, cloaking the tops (or more) in anything from a wispy fringe to a dramatic blanket. Many moods, many faces to what is before your eyes and it can change from one to another in moments. 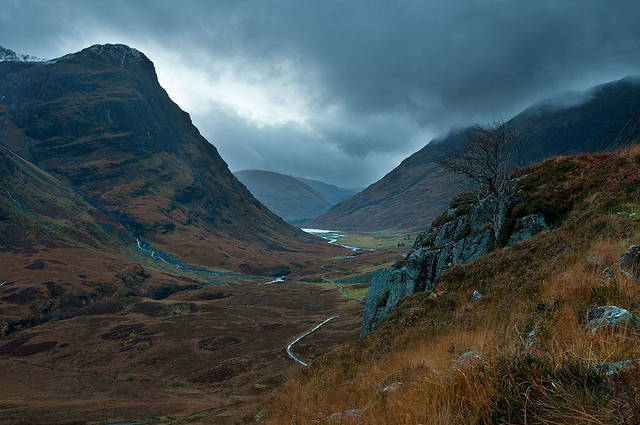 This is the hinterland of Britain’s highest mountain—yes, we have them, maybe not overburdened with them but they exist!—Ben Nevis (at 4408ft Scotland and Britain’s highest) and it’s as if the Highlands huddle around in protection like some giant geological rugby scrum.

Breathtaking All the Way

For all the drama that the mountains bring, you can, equally, be at water’s edge with the many sea lochs that mark Scotland’s western edge providing more than a worthy counterbalance. Peaks descend to loch side; under blue skies, seeming blue waters hint at a naturally pure existence but under grey, the hints of drama that a change in nature’s mood can bring.

The western coast of Scotland is a fascinating place. One look at a map shows a ribbon edge of land and sea inlets, the sea lochs, as if some geological mass of hair straggled in the wind.

Inland, the geological drama remains. As a match for the central belt in the south, here in the Highlands, so also a geological wrenching. From SW to NE from one coast to another, this amazing landscape was torn along a fault line that has produced its own dramatic stamp to the landscape: the Great Glen. One huge glacial valley stretching (approx.) 70 miles in length, its formation was completed by the last ice age whose legacy is a series of four lochs (Linnhe, Lochy, Oich and Ness). With long vistas stretching the length of the Great Glen, the hillsides of this geological passage stack like dominoes one after another into the distance and the waters of the lochs lap the road edge as you drive its length. This is landscape drama that continues the trend of all that has preceded it and carries you to the northern Highland city of Inverness where the waters of the River Ness flow through the city from the Loch that is its namesake.

In the Moray Firth, whose shores hem the northern edge of Inverness, dolphins will frolic on the tides; whilst to look inland again brings the northern fringes of the Highlands, whose foothills merely remind you of what lies beyond.

A World Away From Everywhere Else

This is a land of dramatic contrasts, as you will come to realise in travelling through it. When in the Highlands, the Lowlands and their city life are a world away. The prospect of England let alone London can seem as if on another planet. The converse can also be said!

If natural beauty and seeming tranquillity isn’t enough, man’s footprint is indelibly part of the region’s history—from early Pictish tribes to the Highland Clans and beyond to the current day. To experience the landscape is also to realise that they clearly made them tough up here: it’s called survival! But also why a system of self-reliance and the chance to be a bit ‘rough around the edges’ all came as part of the package as a Highlander.

Highlands and Lowlands:  the two sides of Scotland—in geography and, historically, in its people.

Tales of a Nation’s conflict, of rebellion against Government; of Jacobites, Clansmen, political ructions of the 17th into 18th Century; military roads and mighty forts to subdue the Highlands; it’s all the back story. Interwoven amongst much, also the traditions of a nation, of tartan, celtic Christianity, pipes, song…a distillery or few…and lore.

And it’s well worth discovering! 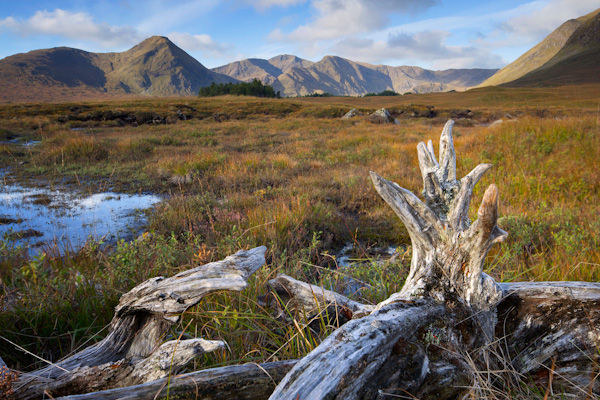 Firth = mouth of a river