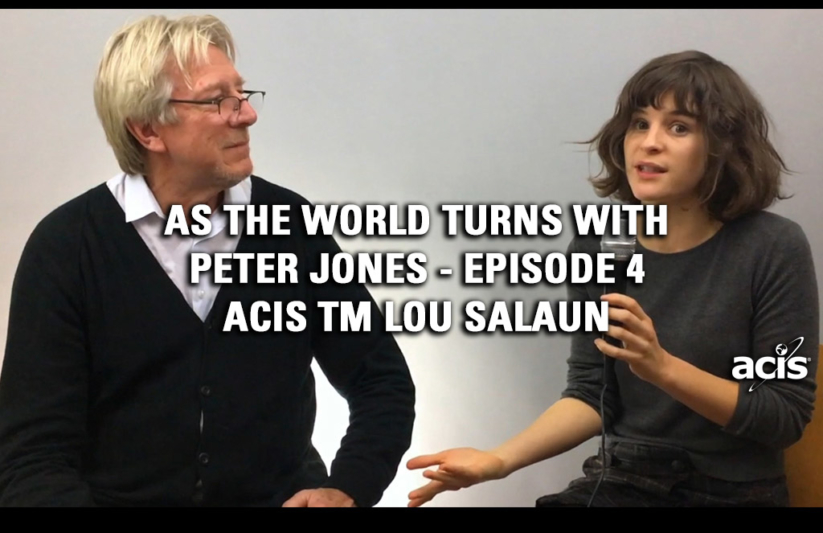 In December of 2016, before our annual meeting of the ACIS Tour Managers, we recorded a series of interviews with a handful of tour managers in our London office. The fourth of those interviews we’re publishing today is with Lou Salaun.

ACIS Tour Manager, Lou Salaun, was born and grew up in the South of France. She studied acting in London before moving to Paris where she works as an actress specializing in performing the work of classical French playwrights such as Molière. She’s very proud of her Southern French heritage, and she discussed her journey to becoming an actress, why it’s important to pronounce city names like the locals, and more with ACIS President Peter Jones.

6 French Classroom Lesson Plans to do with Your Students Based
on the New Bloom’s Taxonomy For World Language Instruction.

Peter Jones: So I am honored, I think I can use that word, honored to be here with French tour manager, Lou Salaun. And Lou, explain to us, tell us a little bit about yourself. Where are you from, you know, that kind of stuff.

Lou Salaun: OK. I’m not from Paris, because there’s not only Paris in France. There’s also the south. [CHEERING]

Peter Jones: You’re from the south?

Lou Salaun: Yes. Near Spain actually, in Aubord. I was born in Aubord, which is near Nimes, where we have the most beautiful arenas in the world. I know what you’re thinking, that are in Italy. But they’re not. They’re in France. You have to come and see them. They are the best preserved arena you’ll ever see. So I’m from there.

Peter Jones: You’re from the Roman part of France.

Lou Salaun: Exactly. The first part of France that was taken by the Romans.

Peter Jones: OK. All right, so they colonized you.

Peter Jones: But a long time ago.

Peter Jones: To act, so you studied in London for a while, for some time.

Peter Jones: And that’s where you learned English.

Lou Salaun: In London, can you not tell I speak like the Queen of England.

Peter Jones: Yes, you do a bit. Where were you in London actually.

Lou Salaun: In the elephant castle, so the south of London.

Peter Jones: I love the way you said that. That is great, because that’s roughly where I’m from.

Lou Salaun: How do you say it?

Peter Jones: Well, if you know, if you come from around there, you would cut the castle out. And somebody would say to you, where you from. You’d say I’m from the elephant, mate.

Peter Jones: There you go, you go it.

Lou Salaun: In my hood, my hood.

Peter Jones: So then you move back to Paris after you got your English straightened out right.

Peter Jones: No, you know what you’re dead right. Everything should be always said as it is said. If you’re from Cologne. It should be, no, I’m
from from Cologne.

Peter Jones: And if you’re from Rome, you should be from Roma, right.

Peter Jones: I mean it’s just the way it should be.

Lou Salaun: I mean if go in the streets of Paris, and you say to everybody, I’m so happy to be in Paris, the Parisians are going to look like this.

Peter Jones: What about if your Italian, and you’re in Munich, and you say, I’m really glad to be in Monaco, because they call–They add an o to everything, exactly, so then you get confused about all–And Monaco, not to be confused with Monaco.

Lou Salaun: Exactly. And that’s how people end up thinking that Belgium is in France, for instance. You know, get confused with European geography.

Peter Jones: So now you didn’t move back to Paris, because you weren’t from Paris, you from the South. Then you moved to Paris, and you said, you’re an actor.

Lou Salaun: Yes. Even better than an actor, I’m an actress.

Peter Jones: Yes. I’m always curious about that. Is that what you say? Do you say I’m ad actor or do you say I’m an actress? Is it feminized?

Lou Salaun: I’m not sure. In French I think we do feminize it, because it’s a whole other kind of category to be an actress. We say a comedienne in French. And it goes with a whole lot of things. It means we are a bit like princesses, and we are very dramatic, and we love to do extravagant things. And so when you say you’re commedienne, you are also kind of telling the person in front of you that you’re not scared to dance in the middle of the street, or scream things.

Peter Jones: So as an actress what kind of acting do you do?

Lou Salaun: Well, I do a lot of theater.

Lou Salaun: A lot of theater, and we do a lot of Moliere, but not only. But a lot of Fre– we are very, very, very, very–French people are very
proud about two things, food and their culture. So that means we don’t–if I’m a French actress, I will play French playwrighter.

Lou Salaun: For us that’s the real thing to do, you know.

Peter Jones: Did you study acting in France or did you also study in England?

Lou Salaun: I started studying it in London, and in England they only made me work on Shakespeare, so was tired of that. So I went back to France.

Peter Jones: How can you be tried of Shakespeare??