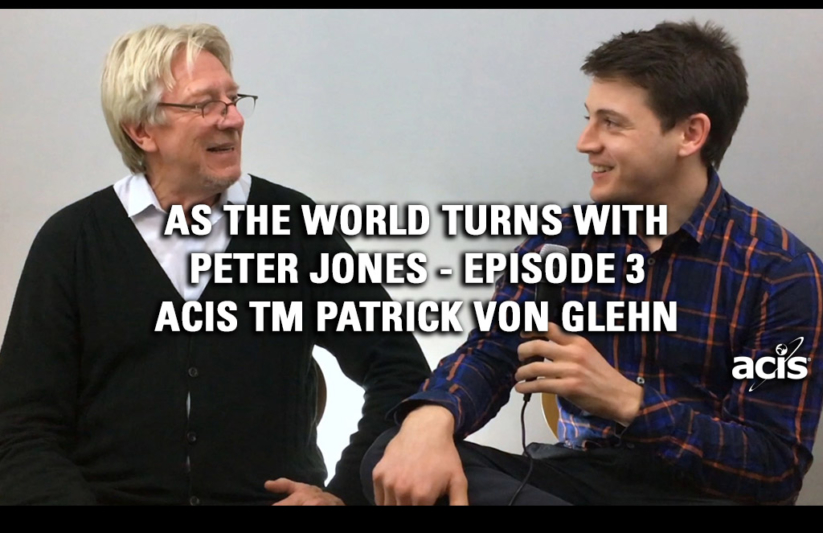 In December of 2016, before our annual meeting of the ACIS Tour Managers, we recorded a series of interviews with a handful of tour managers in our London office. The second of those interviews we’re publishing today is with Patrick Von Glehn.

ACIS Tour Manager, Patrick Von Glehn, was born in Zimbabwe and grew up in England. After completing his Ph.D. in Chemistry, he decided to try something new: he moved to Munich, Germany to live with his German family and learn the language. Several years later, he’s moved to Berlin and speaks fluent German. He discussed the cultural differences between the different regions of Germany, the challenges in learning the language and more with ACIS President Peter Jones.

Peter: So I’m here with Patrick Von Glehn. Welcome. Thanks so much for coming. And just as a formal introduction, I think it would be great if–tell us a little bit about yourself. Where are you from?

Patrick: Yeah, so from is a bit of a complicated story. Born in Zimbabwe, grew up in Reading, which is a little less exotic, just west of London. But for the last two years, I’ve been back in–not back in Germany, I’ve moved to Germany to go back to my German roots.

Peter: So your mother or father were German?

Peter: That is wonderful. Wow. So you grew up in Zimbabwe, though?

Patrick: I was born in Zimbabwe, but moved when I was very young to England.

Patrick: My mom is Zimbabwean.

Peter: Oh, OK, right. So you grew up in Reading, therefore properly Reading, just down the Thames, right?

Peter: So a southern boy, as it were.

Patrick: You can probably hear.

Peter: Yeah, exactly. I’ve got to say, I’ve got the accent, yeah. And so you speak German, and you have obviously some family background in German. Did you study German at school?

Patrick: No, actually just– so I finished university, finished my PhD–

Peter: So no language at school?

Patrick: Yeah. I did A-level French, which is what you do when you’re 18. Did a bit of traveling at university, picked up a bit of Chinese traveling in China.

Peter: Well, hang on one sec. So you have Chinese going on here?

Peter: So where did you study Chinese?

Patrick: Actually up a mountain, a kung fu school with a Taoist priest.

Peter: Whew. And how long were you there?

Patrick: I was up a mountain for about two months. Then traveled around for about two weeks, and then have also been to China on other occasions.

Patrick: By the end of the trip, I could get by, but Chinese is incredibly hard. So for an English learner, it’s among the hardest languages you can learn.

Peter: Can you write it?

Patrick: I tried a little. I learned some of the characters. But it has faded. This is– we’re talking eight years ago now. But it’s a beautiful art, writing.

Peter: Yeah, it looks beautiful with the symbols. And I mean, it’s sort of– it’s there, right, staring you in the face. I mean, but– amazing. So you studied German after university?

Patrick: Yeah. I just finished university. I did my PhD in chemistry, but decided that the academic research career was not for me, so I thought a break, what do I want to do. I have all the German family, German grandparents. A lot of them–my family live in Germany. I thought I’m just going to move to Germany with no plan, and pick up German from scratch.

Peter: So no German.

Peter: No German. A PhD in chemistry.

Peter: Yeah? And a little Chinese. French in your back pocket, right?

Peter: And so you head to Germany.

Patrick: That was a plan. I enrolled in language school, did two months intensive language school. Lived with a cousin in Munich. And just– yeah, just went for it.

Peter: Wow. So that, folks, is how you learn a language. OK, so Patrick, off you go to Germany, basically not a word in your briefcase. And you go there, and your first landing point is where?

Patrick: Munich. I chose there because I already had family there. I had a very, very friendly, generous cousin. Well, a cousin of my
dad, so she’s around 45. Her kids had just left home. She had some empty bedrooms.

Patrick: I’d never met her before, by the way. My grandmother just arranged all this from in advance. She said, oh, go stay with your cousin, Connie. So arranged it, I rocked up, we got on like a house on fire.

Peter: And she– and she’s German, so–I mean, I hate to say this, but she probably spoke some English, right?

Patrick: Well, because she’s–so it’s interesting, with the Germans below a certain age from West Germany, people tend to speak excellent English.

Peter: And so she’s within that cutoff.

Patrick: She’s about 45, so English was very good. So to start with, we actually did speak a lot of English, because I just turned up in the country, didn’t know anyone.

Patrick: It wasn’t the real hardcore way to do it, but yeah. Apart from that, I was in at the deep end.

Peter: And so then you eventually, having studied German, I would think, in Munich, you headed up to Berlin?

Patrick: Yeah. Berlin is where I live now. It’s a very different place from Munich. One of the reasons I moved is because I had moved to Munich–or Germany without very much of a plan. Certainly no career in mind. And Munich’s a very expensive place. It’s very wealthy. I didn’t want to rely on my cousin for, you know, indefinitely, so I wanted to make my own way out in the world. And it’s much more straightforward in Berlin to try and make yourway on a small budget. I wanted to start working, but I wanted to work in a fully German environment to really get my language up to–

Peter: So by this time, I would imagine your German is pretty good, right? By the time you get to Berlin.

Patrick: Two months intensive language course, you can certainly get by. You can– in daily life, you can travel around, ask for directions, order food. Can’t really have in-depth conversations. But I was still very excited to be there, so still just speaking German with anyone.

Patrick: So there aren’t–I now notice the differences, but at the time I think my German wasn’t good enough–for one point. I wasn’t familiar enough with the different accents. And for a second point, both Munich and Berlin are extremely cosmopolitan cities. So even if the people
you’re meeting are German, they are probably not actually from Munich. If you meet people just in an international context, in a business context,
or on the street–in the center in Munich and Berlin, chance is that they’re actually going to be from there, and have the local accent
or dialect are slim.

Peter: So what’s the difference, though–because I’ve been to both cities, and I’m just curious what–but you know these places really well. What’s the real difference between, say, these two, you know, pretty important cultural cities in Germany?

Peter: Do you feel– I mean, I’m just curious because Munich, you know, it sits obviously closer to the borders of the bigger countries. You know, Italy and even France, maybe. Certainly Austria. And do you–Berlin is way out there. I mean, you’re closer to Scandinavia in some ways, aren’t you?

Patrick: Yeah, so you see a huge difference architecturally. Because Munich is heavily influenced by Italy. You had a lot of the Bavarian rulers really looked to the ancients, to Italy and to Greece. And they built up. And they wanted to call–they wanted Munich to be Athens on the Isar. Isar’s the river that goes through Munich. And then in Berlin, you do see some classical influence, as well, but much less. But that’s also partly
because Berlin is–the architecture is much more modern due to the destruction in the second world war.

Patrick: Which, although actually Munich was also heavily bombed. Up to 80% of the city center was destroyed, but it was all built back up in that old style. So they replicated it.

Patrick: Whereas Berlin, you have some examples of that. The Berlin cathedral, the dome was rebuilt in the original style. But generally, very little. And that’s partly because half of Berlin was in East Germany, and they didn’t have the money to redevelop it. And then West Berlin was sort of an island. Also didn’t have the money.