If you find yourself traveling along Biscayne Blvd in North Miami, you might pass by the North Miami Tennis Center. Don’t just drive by because you are also driving by one of the oldest buildings in the Western Hemisphere. No, not the tennis center. The St. Bernard de Clairvaux Church, better known as the Ancient Spanish Monastery. The Monastery sits hidden away on an unassuming patch of land off the highway but is a can’t-miss attraction for anyone hoping to delve into Spanish culture.

The history of the Ancient Spanish Monastery is one that dates all the way back to the 12th century. It was actually built in Spain in the province of Segovia. The construction started in 1133 CE and lasted for nearly eight years. The original name was “Monastery of Our Lady, Queen of the Angels” or the “Royal Monastery of Saint Mary” but was later changed to honor Bernard of Clairvaux, who was the primary reformer of the Cistercian Order of monks and nuns. The Monastery was built in the traditional style of Cistercian Romanesque architecture. 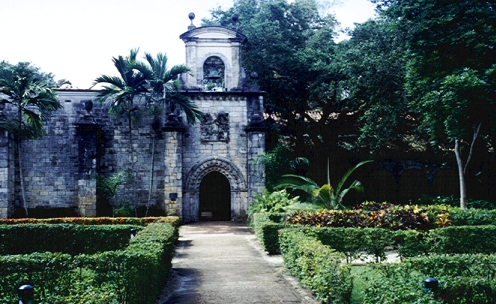 Soon after construction was completed, Cistercian monks from France were brought in and inhabited the Monastery for 700 years. That region of Segovia had an increasing Muslim population, which led to many Christian conquests and reconquests. The Monastery was built with necessary defensive strength in the form of minor fortresses. Tension started to rise between the newly arriving Cistercian monks and the local residents, and the differences between the two groups caused many disputes. A social revolution in the 1830s not only forced the Monastery to close but its structure was seized and sold off piece by piece. During this period, what remained of the once important Church was reduced to be merely a granary and stable.

Fast forward to 1925 when William Randolph Hearst, an American newspaper publisher, purchased the Monastery’s cloister and most of the buildings for $500,000 with the hopes of building it back up in California. What was left of the Monastery remained privately owned in Spain and on June 3, 1931, it was declared a national monument. Hearst had everything he purchased taken apart brick by brick and shipped to the US in 11,000 wooden crates. Not soon after Hearst successfully shipped his new purchase, he fell into some unforeseen financial trouble. He was forced to auction off most of what he owned, including the now boxed-up Monastery. After the auction took place, the 11,000 crates sat in a warehouse in Brooklyn for over 25 years.

The Monastery was bought again in 1952 by two American businessmen, Raymond Moss and William Edgemon, and they moved it to where it stands today in North Miami Beach. They supervised its reconstruction which took almost two years and cost them nearly $1.5 million, which made up for the fact they bought it for only $19,000. When it was fully restored, the reinvented Monastery acted mostly as a tourist attraction during the 1950s until 1964 when it was purchased one last time by multimillionaire banker Colonel Robert Pentland Jr. and donated to the Bishop of Florida.

Today, the historic Ancient Spanish Monastery serves as an active Episcopal monastery with regular services in the chapel. Services are offered in both English and Spanish. You can also get married there! It’s open to the public where anyone can tour around themselves and discover why it such a cultural and religious landmark. The monastery’s fascinating history is on full display and when you walk on the property you instantly feel as if you just stepped back in time to 12th century Spain.

Interested in exposing your students to Spanish culture without going overseas? Check out our domestic trips offered via ACIS America!

Learn about 10 Fantastic Places in The US to Go with Your Students!