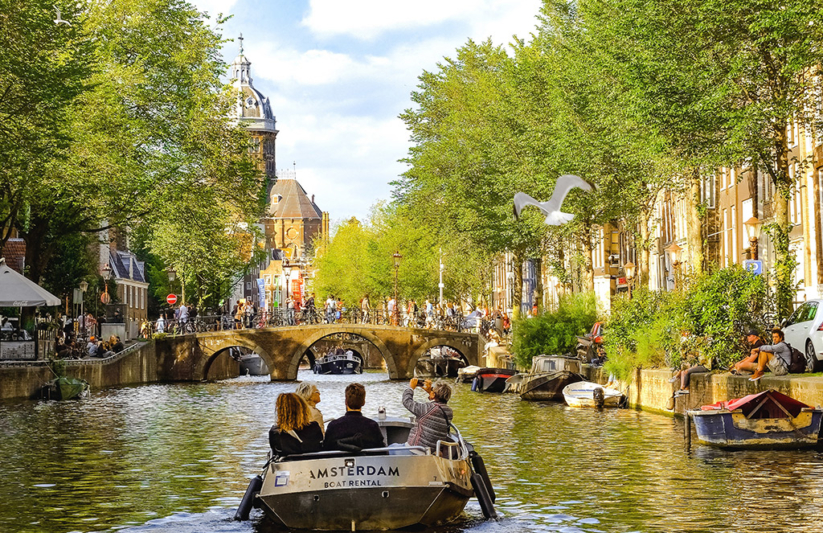 Amsterdam is often referred to as the Venice of the north. But Amsterdam has over 160 canals spanning around 75km, which in fact represents twice that of Venice. And canals are just as important to this city’s history, its present and its future.

At the end of the 16th century, Amsterdam became an important naval and trading center, grew rich, and embarked upon an ambitious architectural project to develop the city through canals. These began to be dug during Holland’s “Golden Age”, starting in 1612, mainly to transport merchandise and in order to drain land and build houses.

As it developed, the city’s identity became linked to its waterways. All the 17th century buildings perfectly aligned along the canals were once used to stock produce brought along by boat. Today, these are pricey residences. You’ll notice that Amsterdam’s houses are very narrow because housing tax used to be calculated in relation to the width of a façade. They are so narrow that a pulley system on the roof is used to this day to carry furniture through windows when moving house!

Nowadays, you’ll also find people living not just along but on the water. Amsterdam has 2,500 houseboats, originally used as lodgings for the poor in the 1960s, but now desirable dwellings with gas, electricity and running water. If you’re lucky, you may even come across an itinerary merchant delivering a local speciality, smoked eels, to his customers by boat. In the past, all sorts of merchants existed on the water, but the last florist at Amsterdam’s old floating flower market closed in 2019. Today, they have largely been replaced by tourist boats.

For Amsterdam, it is both a blessing and a logistical challenge to host the 18 million visitors that come to see this unique city each year. For most, the best way to get around the city is not by boat, but by bike. Unfortunately, this means that 14,000 bikes fall into the canals each year and have to be fished out by local authorities along with shopping carts and all sorts of other discarded objects.

Over time, Amsterdam’s population has grown from 50,000 in the 17th century, to over 800,000 today. Immigration has played a big part in forging the city’s identity. In 1660, only 25% of the city’s inhabitants were Dutch, 75% were foreign: everyone from French Huguenots to Spanish Jews fleeing persecution in their home countries. Today, 120 different nationalities make up the city, and just like in the past, they enrich it with their skills and culture.

But perhaps even more than tourism and immigration, other factors are influencing the future of Amsterdam and its canals: technology and climate change. Amsterdam has over 1,500 bridges, and 140 bridge operators were employed to open and close some of them to allow larger boats to pass. Soon, these people will no longer be needed. An automated digital network using optic fibers and cameras will be able to lift and lower the bridges in their place.

Amsterdam also has a dam system that controls water distribution for the whole region, and the height of the water in the canals. This system will be increasingly crucial as torrential storms become more frequent. With rising sea levels, the whole of Holland may be at risk, and technology will be essential in finding immediate solutions to tackle the new infrastructure challenges brought on by climate change.

Another less serious but unfortunate victim of climate change is ice-skating on the canals. Temperatures must be below zero for a full week and the ice at least 7cm thick for locals to be able to skate on the canals, and this doesn’t happen all that often. The last time some of the canals froze was in 2012 and 2018, allowing delighted locals to finally dust off their ice-skates.

But the city is doing its best to prepare and adapt to the challenges ahead, be they mass tourism or climate change. Soon, the canals may well have a bigger role to play in the city’s urban transport. Only electric boats will be allowed on the canals, the number of tourist boats limited, and parts of the canal system open for swimmers. Amsterdam’s canals were declared a UNESCO heritage site in 2010, so they will hopefully continue to play an integral role in the city for centuries to come.