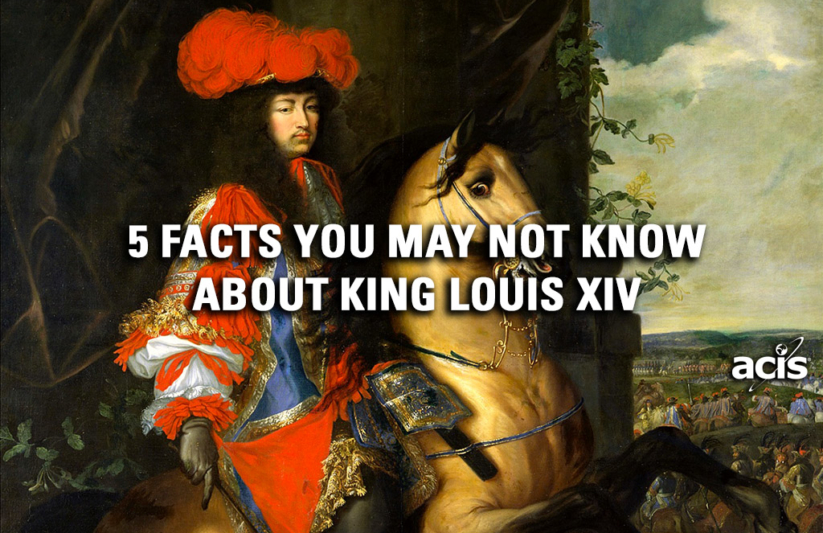 If you have ever had the chance to visit The Palace of Versailles in France, you probably have an idea of the amount of influence King Louis XIV carried. As the longest reigning monarch in European history, King Louis XIV ruled France from 1643 until his death in 1715. Also known as the “Sun King” and “Louis the Great,” Louis XVI was a lover of art, literature, music, theater, and sport. He is remembered for his eccentric personality and his extraordinary impact on French history. Learning about significant historical figures can give French language learners rich talking points and material to apply to their language practice. Here are some interesting facts about Louis XIV for French language learners or anyone interested in impressing their friends!

1. Louis’ Mother Served as His Regent

After Louis XIII’s death, Louis XIV became king at the tender age of 4. It would have been custom for Louis XIV’s mother, Anne of Austria, to become Queen Regent of France until her son was of age. However, Louis XIII apparently lacked faith in his wife’s ability to rule. In his will, Louis XIII arranged for a regency council to rule on his son’s behalf, appointing Anne head of the council to ease her disappointment. Disobeying her husband’s will, Anne orchestrated an annulment of the council and took over as Queen Regent aided by her chief minister, Cardinal Jules Mazarin of Italy. The royal family was driven out of Paris twice because of Anne and Mazarin’s radical policies, giving Louis XIV a deep distrust of Paris and its people as he grew older.

2. He Believed Himself a Direct Representative of God

Louis XIV’s parents christened him Louis-Dieudonné, meaning “gift of God.” As if that wasn’t enough to go to his head, Mazarin instilled in him the impression that Kings are divinely chosen. Louis XIV adopted the sun as his emblem, associating himself with the Greek and Roman sun god Apollo. He even played Apollo in a royal ballet. Like the planets revolve around the Sun, Louis XIV believed that France revolved around himself.

3. He Revoked the Right to Worship from French Protestants

Louis XIV’s grandfather Henry IV granted French Protestants, known as Huguenots, political and religious freedoms when he issued the Edict of Nantes in 1598. The devoutly Catholic Louis XIV believed in the motto, “one king, one law, one faith.” As a result, in 1685 Louis XIV revoked the Edict of Nantes and stripped the Huguenots of their previously held freedoms, executing anyone who practiced any religion that was not Catholicism. Although emigration of Huguenots was banned, Louis XIV’s crackdown led to 200,000 or more Huguenots fleeing France in search of more tolerant countries in Europe or in the American colonies.

In 1682 French explorer René-Robert Cavelier, Sieur de La Salle decided to embark on a major expedition to Fort Crevecoeur. La Salle canoed down the Mississippi River with a group of Frenchmen and Native Americans, and along the way, he came across the Mississippi basin. La Salle claimed the territory in the name of France from the natives and named it La Louisiane after Louis XIV. The territory did not become American property until the United States purchased it in 1803.

5. His Heart was Devoured After His Death

About a century and a half after his death, it is said that Louis XIV’s heart became a meal for the eccentric Englishman William Buckland. Buckland was a geologist and paleontologist who had an unusual desire to eat his way through the animal kingdom. While he was dining with company at a country house in Oxfordshire, England, he was presented with the heart. According to the raconteur Augustus Hare, Buckland exclaimed “I have eaten many strange things, but have never eaten the heart of a king before”, and casually washed it down his throat before anyone could stop him.