You may have seen our recent blog post about books that have inspired the team at ACIS to travel. We also asked a similar question about films. Which movies fire up the wanderlust in us? Here’s a list of 30 films—in no particular order—that give us itchy feet.

‘Apart from being the best film ever made, The Third Man gives such a vivid picture of post-war Vienna that you want to walk the streets, see the sights and ride the Riesenrad in the Prater. Whenever I’m in Vienna, Harry Lime is never far from my thoughts.’
Edward Bates, Tour Manager, London, UK

‘Travel doesn’t only have to be relaxing but can also be inspiring to make a difference in the world.’
Jeff Sullivan, Client Services, Boston, MA

‘I’ve been traveling since I was one year old but watching this film made me want to cycle across Brazil and Argentina (preferably behind Gael Garcia Bernal…). It also made me realize how lucky I was to hail from such a beautiful country as Argentina.’
Dana Ptacinsky, Tour Manager Office Director, London, UK

4. Priscilla Queen of the Desert

Priscilla Queen of the Desert

‘The fantastic voyage from Sydney to the Red Center of Australia made me want to experience the heat, colors and sounds of the desert for myself.’
Peter Ede, Tour Manager, London, UK

‘This moving film inspired our ACIS trip to WWI sites in France and Belgium. It was unforgettable.’
Saralee Peccolo-Taylor, Tennessee Regional Advisor, TN

‘You can’t be afraid to head out into the great wide world!’
Pascale Hickman, Tour Manager, Bozeman, MT

‘This film sums up a lot of what being young in Europe means nowadays: young Europeans are increasingly multicultural and multilingual. It made me dream of living the Erasmus dream.’
Florent Santaniello, Tour Manager, London, UK

‘It depicts the life of a student living abroad in such a vibrant and exciting way and shows how enriching it is to live in an international setting.’
Sabrina Denault, Encore Tours Regional Manager, Boston, MA

‘It is an affirmation of the human being as part of a system, not as the lord of it.’
Giacomo Gambone, Tour Manager Operations Coordinator, London, UK

‘Because travel means freedom of the mind, the letting go of all ties.’
Ilaria Fiore, Tour Manager, Italy

A Room with a View

‘I lived in and loved (and still do love) Siena, Tuscany. This film reminds me of the beauty of Tuscany.’
Lucy Ryan, Tour Manager, Spain/Italy/UK

‘Absolutely fell head over heels in love with Montmartre on screen! After my first trip to Paris, the neighborhood met and exceeded my very high expectations.’
Erin Stern, Online Marketing Manager, Boston, MA

The Sound of Music

‘This was the first movie I remember seeing in the theater in the 1960s. I knew I had to see Salzburg. It was a dream come true to do it with ACIS!’
Pam Skaar Meier, Area Administrator and Travel Coordinator, MN

‘Possibly seems like an odd choice, but the scenes of Greece were just so gorgeous!’
Roni Hyman, Marketing Intern, Boston, MA

My Life in Ruins

‘It’s a comedy about group travel. It always makes me laugh and remember that we can not control everything and part of the adventure is the unexpected.’
Mark McBride, Group Leader and Academic Travel Advisor, Bloomington, IL

‘It reminds you of the exciting cycle of traveling connecting you with history and literature and how what you learn from them can bear fruit in your life today.’
Nicolette Miller, Group leader and Academic Travel Advisor, Westlake, OH

‘Even though this movie was released after I was bit by the travel bug, it definitely makes me want to return to Paris any chance I can!’
Jill Federschneider, Senior International Program Manager, Boston, MA

‘Together with Amélie, it reminds me what an amazing city Paris is and how much I love it.’
Marcello Mereu, Tour Manager, Brussels, Belgium

16. The Secret of Roan Inish

The Secret of Roan Inish

‘This marvelous adaptation of the Rostand play evokes both the aspirational spirit of France in the seventeenth century and the romantic vicissitudes of the protagonists, weaving an intoxicating air of francophone charm (it’s a particularly star turn from Depardieu).’
Daniel Finch-Race, Tour Manager, UK

‘This film tells you everything you need to know about Berlin and East Germany.’
Ben Pollard, Tour Manager, York, UK

19. The House of the Spirits

The House of the Spirits

‘I chose this because of my love for South America.’
Grazia Parisi, Office Accountant, London, UK

‘This is all about the redemptive power of travel.’
James Harding, Tour Manager, Hertfordshire, UK/Csikszereda, Transylvania

‘The scenes of the characters riding along the Italian countryside were stunning!’
Kristin McDuffie, Academic Travel Advisor, GA

‘It’s a series of short films that capture so many facets of Paris and show you what a diverse city it is. Everyone thinks they know Paris but there’s always one more thing to be discovered – and this film shows you a few of them.’
Richard Oates, Tour Manager, Dorset, UK

24. The underwater documentaries of Jacques Cousteau

The underwater documentaries of Jacques Cousteau

‘His work made me determined when I was a child to follow in his footsteps which I did, literally and lived on the island of Cozumel filming the amazing sealife there.’
Deborah Wilson, Supervisor/Tour Manager – Spain and Portugal, Granada, Spain

‘It gives me a sense of the entire world out there.’
Julie Fratarcangeli, Director of New Business Development, Boston, MA

‘A bit like the book – it’s very atmospheric and makes you feel like you’re in those places.’
Sarah Perry, Tour Manager, Edinburgh, UK

‘It’s a beautiful story, both exotic and political since it deals with the relationship between East and West.’
Caterina Panetta, Tour Manager, Rome, Italy

‘A film which focuses on our interconnected world. The initial incident—involving American tourists in a bus traveling through a world they do not understand, immersed in their own personal issues—sparks a world wide chain reaction. This film got me interested in locations which I would not normally find engaging—urban Japan for example—and superbly highlights our common humanity and littleness in the great scheme of things.’
Kate Webb, Tour Manager, Paris, France

29. The Louvre (narrated by Charles Boyer)

The Louvre (narrated by Charles Boyer)

‘A wonderful documentary that presents the history of the Louvre and many of its works of art.’
Elaine Prestel, Academic Travel Advisor, MI

A Year in Provence

‘I loved watching Peter Mayle learn about the people and culture of the South of France even as he tried to restore a French farmhouse.’
Sue Minor, Academic Travel Advisor/Group Leader, Nashville, TN

Are there any films that you find have inspired you to travel? Let us know in the comments below! 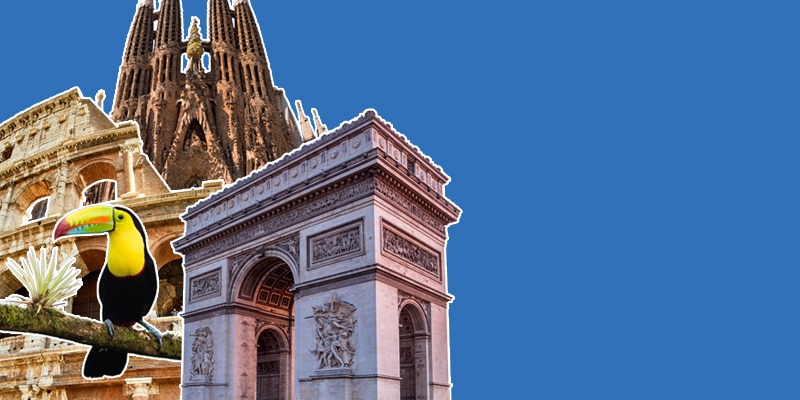 9 thoughts on “30 Movies to Inspire Your Educational Travels”