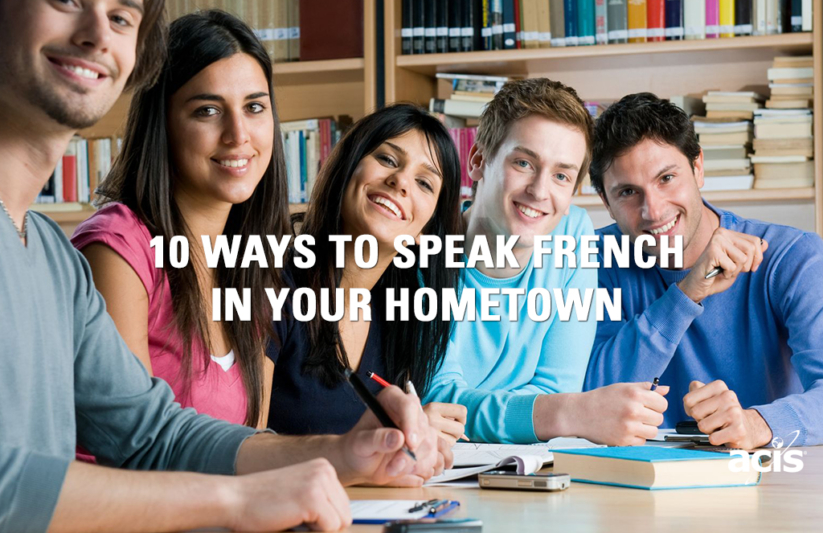 Two weeks ago, we published 10 Ways to Speak Spanish in Your Hometown, the first article in a new series highlighting ways in which language learners can practice wherever they are. This week we follow it up with our edition on practicing French.

There’s nothing quite like being immersed in a native setting when it comes to language learning, but that doesn’t mean encouraging your students to practice speaking French wherever they are isn’t a worthwhile endeavor. Whether you live in the middle of New York City or a small town in Wisconsin resources abound for your students to practice speaking and understanding French. Here are 10 ways  to speak French in your hometown:

Whether it’s at a local high school, college or community center, practicing French as a group by meeting on a semi-regular basis to chat about current events, culture, or French grammar and vocabulary is one of the most popular ways to learn. Meetup.com is a great place to find groups to join, but if a search for your area comes up with nothing, encourage your students to start their own.

Whether they be from Quebec, France, Senegal, The Congo, Haiti, or Martinique, connecting with someone from a different cultural background is always a great learning opportunity. It’s also an especially great way to improve your language skills. If you are planning a school trip to France for example encourage your students to improve their skills. Have them seek out people in their social network or their family and friends’ networks who come from a French speaking country. If they can meet them for coffee once or twice a month at least, it will do a great deal for their confidence and conversational skills in French.

In almost every city across the United States, cultural centers and dance studios offer dance classes representing cultural traditions from Senegal, Mali, Guinea, Haiti and a variety of other French speaking nations taught by native French speakers. Not only is it a great way to make a cultural connection to a French-speaking nation, but there’s a great chance the dance-instructor will jump at the opportunity to chat in their native tongue with someone eager to learn.

4. Skype with a Native French Speaker

If your students tapped their network and came up with none available and willing to chat with them in French, there are still plenty of ways to make meaningful connections with native speakers. Websites like Conversation Exchange and Language Exchanges are designed specifically to connect language learners with native speakers using technology to bridge distance divides.

Again technology comes to the rescue for any student claiming their location is keeping them from connecting to native French speakers. Perform a quick podcast search for language learning and you’ll be overwhelmed with choices in no time. Here are few that come recommended to start:

Much the same as podcasts, interactive language learning apps are abundantly available these days. Here are a few well-known options to start out, but there are plenty more only a quick app store search away:

Duolingo: Duolingo is a social learning platform that emphasizes co-learning and motivates students with badges, points and awards for completing milestones.

Mosalingua: Mosalingua is a platform that’s a good blend between an interactive French app and an audio phrasebook.

Wikipedia exists in 285 different languages (including French). Next time you want to learn about a given subject matter, do your research in French! You can always flip back and forth to the English version of the same article to help with any troublesome phrases.

France has a rich musical tradition with several artists who’ve made significant contributions to popular musical culture over the years. There’s also a plethora of African and French Caribbean artists who sing in French. The melodic nature of the French language lends itself very nicely to music. Here are several French speaking singers to get your students started:

Reading a book or newspaper in French is another location-agnostic way for your students to improve their French skills. They could start with a book they’ve already read in English like Twilight or Harry Potter as a starting point. They could also start with shorter childrens’ books before moving up to more advanced literary works.

French-language newspapers gives students an opportunity to catch up on current events while practicing their comprehension. For an exhaustive list of publications in French from a wide array of countries, consult this list compiled by MIT.

Of all of France’s cultural contributions to the world, film is near the top of the list. Films like Amelie and The Red Balloon are some of the most well-known, but France has a long-standing established film industry that’s published hundreds of great films over the years. FluentU.com published a fantastic article detailing what to look for in a French film suitable for French learners with several French films available on Netflix included.

One word of caution: French culture has a markedly different view on portraying the human body on film than American culture. Make sure to do your research in advance of showing a French film to your students if you don’t feel they’re mature enough to view what would be considered “Adult Content” in the US.

How do you encourage your students to speak French in their daily lives? Let us know in the comments section below!