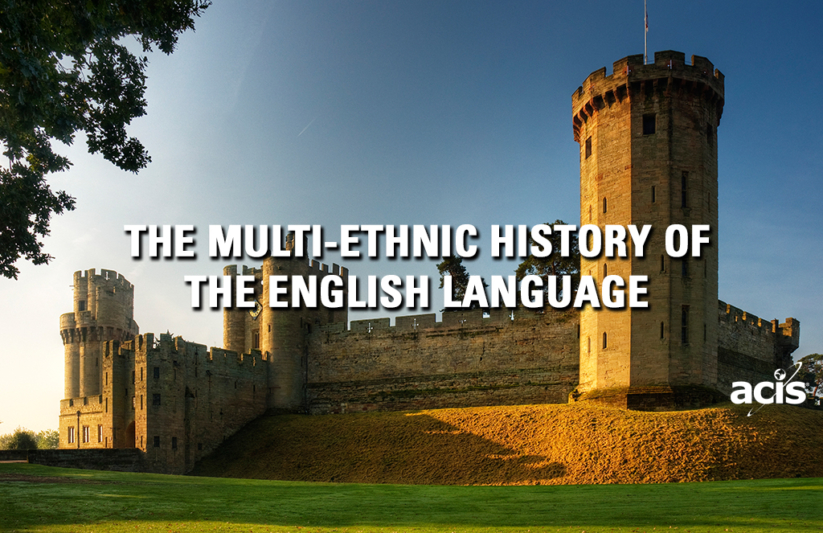 One of the great pleasures (and occasional challenges) of traveling to a foreign country is encountering languages other than English and marveling at how different, how strange, and how utterly unconnected they are from our own mother tongue.

Except English has a lot more in common with other languages than you may think. To think of English as a language that sprung fully formed from a tiny island in the Atlantic is incorrect, and ignores a long and rich history of influence from many other countries, languages, and cultures. English evolved thanks to a host of cultural, political and economic relationships both negative (e.g. invasion) and positive (e.g. trade, academia, the arts).

English is classified as an “Indo-European” language, as are the majority of modern European languages. This broad family of languages is divided into several different types, and two of these—Germanic languages and Romance languages (languages with origins in Latin)—are the most significant in terms of the history of the English language.

The journey to modern day English started in the fifth to seventh centuries when West Germanic settlers began invading Britain. The language they brought with them, which we call Old English, became dominant as the native Celtic inhabitants of the British Isles were pushed back into what is now Cornwall, Scotland, Wales and Ireland. Old English continued to develop through invasion by the Vikings. Their language, Old Norse, had a huge influence on the grammatical structure of the language, as well as its vocabulary.

English’s turbulent history continued following the famous events of 1066. The invading Normans had a major impact on the language, providing for the first time a Latin/Romance influence through their language, Norman French. Over the next several centuries, the two languages were spoken alongside one another, then combined to become Middle English.

Around the time of Shakespeare, English integrated many words from Latin, Ancient Greek as well as other European languages, particularly French, German and Dutch. The first English dictionary, published by Samuel Johnson in 1755, is a major milestone in the long journey to Modern English. Very roughly speaking, Modern English’s provenance is predominantly Latin (around 29% of modern English words have a Latin origin), French (around 29%), and Germanic (around 26%), but around 5 to 10% of English words come from beyond those three main roots.

Make no mistake, it would be a challenge to speak a single sentence in English that wasn’t influenced by more than one language. (That last sentence was brought to you by Germanic, Latin, Dutch, Old French and Old Norse languages).

Which languages inspired which English words tells a fascinating history of the relationships between countries. For example, French gives us a lot of food related words, both directly as loan words—such as au gratin, pâté, mayonnaise—as well as by a more circuitous route from Old French, such as beef, veal, pork (spot a running theme?), mustard, sauce often due to the fact that Norman French was the language of the aristocracy following the Norman Conquest. From Italian we get many terms relating to music, art and architecture (many dated to the time of the Renaissance), while Spanish ‘donated’ many words relating to geography and landscape (canyon, tornado, breeze) and in the US in particular named many of our cities and states (Las Vegas, San Francisco, California, Florida).

Today, English is truly a global language, both in terms of the number of people who speak it, but also in the number of languages and cultures that have influenced it. In the early history of the language, the sources and influences were England’s close neighbors, invaders and trade partners. Nowadays every part of the globe has made a contribution—see ketchup (Chinese), shampoo (Hindi), taboo (Tongan), tycoon (Japanese), vampire (Serbo-Croatian), jenga (Swahili).

If you really want to dig into the patterns of influence on English, Slate magazine has a great interactive graphic created by Dr Philip Durkin of Oxford English Dictionary. It’s perfect if, like me, you’re a huge language geek*.

history of Englandhistory of the English language