Go Digital at E-Estonia in Tallinn

Go Digital at E-Estonia in Tallinn

How did one little country make big advances in information and communication technologies? Get a hands-on look at how e-Estonia is inspiring innovation and the tech world at the e-Estonia Showroom. This busy center has hosted everyone from presidents and ministers to CEOs and journalists and now you have the same opportunity to see firsthand how Estonia has built a digital society.

How did one little country make big advances in information and communication technologies? Get a hands-on look at how e-Estonia is inspiring innovation and the tech world at the e-Estonia Showroom. This busy center has hosted everyone from presidents and ministers to CEOs and journalists and now you have the same opportunity to see firsthand how Estonia has built a digital society.

Backstage at the Opera in Riga

Backstage at the Opera in Riga

Architecture wonders combine with the delight of theater in this cultural experience. Travel to the center of Riga—known for the highest concentration of Art Nouveau architecture anywhere in the world. After enjoying endless architectural examples to view outside, students will then go inside to explore the Latvian National Opera House. They’ll go “Behind the curtains” with this unique opportunity to see the opera’s beautiful stage decorations up close.

Architecture wonders combine with the delight of theater in this cultural experience. Travel to the center of Riga—known for the highest concentration of Art Nouveau architecture anywhere in the world. After enjoying endless architectural examples to view outside, students will then go inside to explore the Latvian National Opera House. They’ll go “Behind the curtains” with this unique opportunity to see the opera’s beautiful stage decorations up close.

Welcome to Tallinn, the capital of Estonia. Meet your ACIS Tour Manager and being to explore this walled seaside city on the Gulf of Finland offers a beguiling blend of both old and new. It first appeared on a map in 1154, but now is considered the Silicon Valley of Europe due to its tech savvy.

Sightseeing is the order of the day, starting with a panoramic tour by bus and followed by a walking tour of the Old Town, selected as a UNESCO World Heritage Site because of its extraordinarily well-preserved medieval buildings. The walking tour passes through the historical Upper Town, featuring the 13th-century Cathedral of Saint Mary the Virgin, the oldest church in mainland Estonia. You’ll also visit the ornate, onion-domed Alexander Nevsky Cathedral, built in 1900 under Russian rule. Panorama platforms offer scenic views of the sea and the town, and a tour of Lower Town shows off its medieval merchants’ and guild buildings and Tallinn’s Gothic Town Hall. Later in the afternoon, you’ll visit the fascinating e-Estonia Tech Showroom, which will show you the clever and innovative ways Estonia uses information and communication technology in both the public and private sector. You’ll come away with a better understanding of why this tiny country is considered one of the world’s most digitally advanced nations.

This morning you’ll drive along the Baltic Sea to Riga, the capital of Latvia. Along the way, you’ll stop and marvel at the treasures in the Turaida Museum Reserve. This protected collection of archaeological, architectural, historic and art monuments provide an account of the region’s history from the 11th century onwards. Then continue on to Riga, arriving in time for dinner.

The day begins with a sightseeing tour that includes a panoramic tour by bus, with views of the city center and a walking tour of the city’s Old Town, featuring highlights such as Riga Cathedral, St. Peter’s Church, St. Jacob's Church, the Great and Small Guild houses, the Parliament building and the Swedish Gate. In the afternoon, you’ll take an Art Nouveau and Opera tour. Highly stylized art nouveau architecture makes up roughly one third of all buildings in central Riga, giving the Latvian capital the world’s highest concentration of such design. You’ll also visit the majestic Latvian National Opera House for a “Behind the Curtains” program that offers you a unique, up-close look at the opera’s beautiful stage decorations.

Start the morning with an excursion to Jurmala, a seaside resort town on the Gulf of Riga. The city is strongly characterized by its beautiful beaches and architecture, including many ornate timber cottages with elaborate, gingerbread-style trim. It’s also known for its mineral springs and spas. After a relaxing outing, you’ll return to Riga and board the overnight ferry to Stockholm, enjoying a buffet dinner along the way.

Upon your morning arrival, a sightseeing tour of Stockholm showcases key architectural treasures of Sweden’s capital city, including the City Hall and Old Town, as well as a visit to the Vasa Warship Museum, dedicated to the Vasa, one of the world’s largest battle vessels when it was built in 1627. It sank in 1628 and was raised from Stockholm’s harbor 333 years later, in 1961, and then restored. In the afternoon, enjoy free time to roam around this beautiful city at your own speed, perhaps taking in the world’s largest art gallery–the Metro system’s underground stations, about 90 of which feature amazing mosaics, paintings and sculptures that you can admire for the mere price of a train ticket. Or maybe you’ll stroll to the landmark, 20-story-tall Telefonplan tower and use your cellphone to control its colored lights!

An excursion to Uppsala, Sweden’s fourth-largest city, kicks off today’s travels. A guided tour of the city includes the 13th-century Cathedral and Uppsala University. Then you’ll continue on to Sigtuna, a picturesque medieval town. Founded in 970 AD by King Eric the Victorious, Sigtuna was Sweden’s first town and is known for its ancient church ruins and charming shops and restaurants along its main thoroughfare, known as the Stora Gatan, believed to be the country’s oldest road. You’ll visit Sigtuna Radhaus (or City Hall). Built in the 18th century, it’s the smallest town hall in Sweden–maybe even in Europe! The day concludes with a farewell dinner at one of Sweden's most well-known restaurants, Den Gyldene Freden, which has been serving customers since 1722. Then head back to Stockholm for the night for a final evening in Scandinavia. 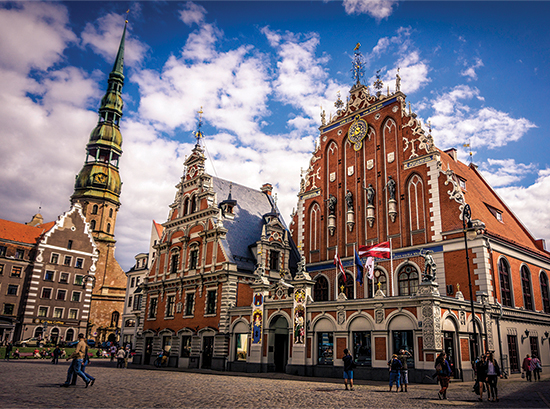 The highlights of my trip were meeting new people and forming bonds with them, having different kinds of food, seeing history in-person and in action, being out of the USA for the first time and making memories that will DEFINITELY live on.” Heather S  Participant