Nesting dolls are filled with tradition and colorful design. And now students can appreciate them in a whole new way when they create their own. They’ll meet with an expert Matryoshka designer and learn the history of nesting dolls and their traditional designs. Everyone gets their own dolls and paints them. Students are then served a traditional Russian tea break and get to take their dolls home with them as a souvenir.

Nesting dolls are filled with tradition and colorful design. And now students can appreciate them in a whole new way when they create their own. They’ll meet with an expert Matryoshka designer and learn the history of nesting dolls and their traditional designs. Everyone gets their own dolls and paints them. Students are then served a traditional Russian tea break and get to take their dolls home with them as a souvenir.

Discover typical Russian specialties during your food tour of Dorogomilovsky Market in the heart of Moscow. Expand your palate when you try delicious local foods such as and borscht, blini and solyanka and learn the traditions behind how they are produced. Perhaps you'll come away with a new favorite food!

Discover typical Russian specialties during your food tour of Dorogomilovsky Market in the heart of Moscow. Expand your palate when you try delicious local foods such as and borscht, blini and solyanka and learn the traditions behind how they are produced. Perhaps you'll come away with a new favorite food!

A full day of sightseeing allows you to contrast old and modern Moscow. First visit the wonders of the Red Square, starting with the Kremlin and the Armoury, one of the oldest museums of Moscow. Then Lenin's Mausoleum shows you the embalmed body of the Soviet Union founder, before you turn towards the unmistakable onion domes of St. Basil's Church, erected by Ivan the Terrible in the mid-16th century. Next pop into the famous GUM department store. After, take a unique Moscow Metro Tour to see see the oldest and the most beautiful of these exquisitely designed, lavish underground "marble palaces." Finally, walk down Old Arbat, a pedestrian-friendly area that's one of the city's oldest streets and historically where many craftsmen had set up shop. Dinner tonight is at a Georgian restaurant.

Today visit Sergiev Posad, known as Zagorsk during the Soviet era. A fortified monastery city with blue and gold cupolas highlighted against striking whte walls, this old Russian pilgrimage spot is a sight you'll never forget. You'll tour the medieval buildings of the famed 14th century Troitse-Sergeiva Lavra, the spiritual home of the Russian Orthodox Church. Then tap into your creative side during a Matryoshka dolls painting lesson. Learn about the history behind these unique nesting dolls and the traditional designs used to decorate them before each painting your own to take as a souvenir. As your dolls are drying, enjoy a traditional Russian tea break. Return to Moscow for the evening.

In the morning, uncover Moscow's culinary culture with a guided food tour and tasting at Dorogomilovsky Market. Sample your way through local eateries and shops purveying borscht, blini, solyanka and other traditional dishes. Then head to the train station for the high speed train to St. Petersburg.

Today explore one of the most beautiful cities in the world! Sightseeing includes the Aurora battleship, whose guns signaled the beginning of the revolution in 1917. You also see St. Isaac's Cathedral and the equestrian statue of Peter the Great, St. Basil's Island and the Piskarovskoe Cemetery. This afternoon you visit the Peter and Paul Fortress, built by Peter the Great to secure Russia's outlet to the sea.

This morning visit Palace Square where you'll tour one of the finest museums in the world, the Hermitage, which includes the Winter Palace, formerly the center of government under the tsars. In the halls you'll find a collection of art rivaled only by the Louvre or the Uffizi. An afternoon excursion takes you to Petrodvorets, the huge country palace of Peter the Great, which was built to resemble Versailles. (In the event that Petrodvorets is closed, a visit to Pushkin will be substituted.)

Today is free to explore and stroll along the main boulevard in St. Petersburg (Nevsky Prospekt). The architecture along the main street is lavish and the street is fascinating, separated at various intervals by canals. 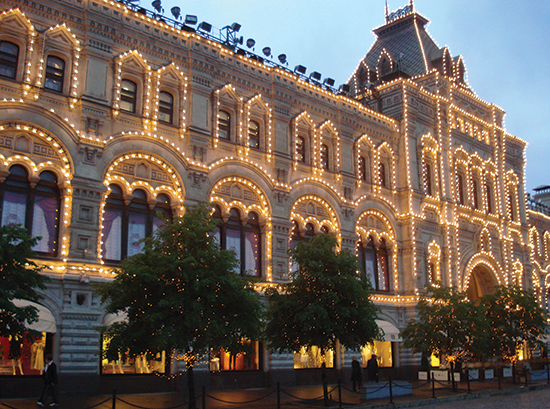 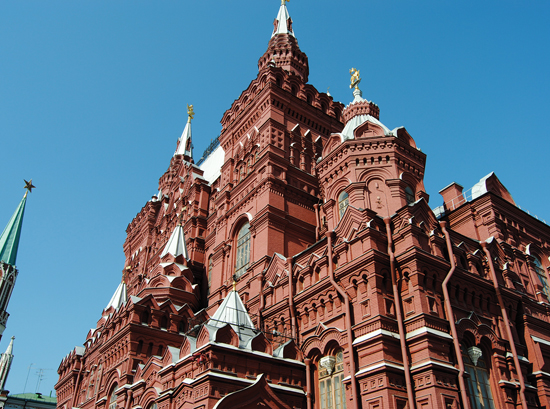 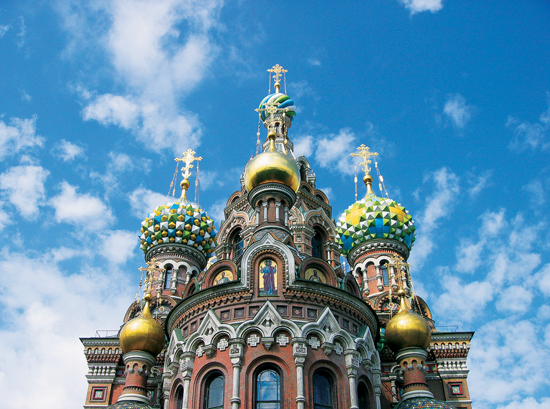 This trip has been amazing. The students appreciate so much after a year of studying Russian history and literature.” Johanna J  Group Leader