Depart school for Montréal, the second-largest French-speaking city in the world. Meet your ACIS Tour Manager at the hotel and begin to explore the city on a walking tour. After dinner, walk to Place d'Armes where you will begin an animated ghost walk through the cobblestoned streets of Vieux Montréal. Other options include a visit to the Rio Tinto Alcan Planetarium or ice skating at L'Amphithéâtre de Glace.

After breakfast, walk to nearby Notre Dame Basilica, for a tour of “the Jewel of Montréal”, and one of the most beautiful churches in all the Americas. Then, walk to an accredited French language school for a comparative class taught by local language teachers focused on either French cultures or survival Quebecois skills. (If unavailable, the group can take part in a historic Chasse au Trésor that will test you on what you have learned thus far about the rich history of New France). After lunch, you can break up into subgroups to practice your French while souvenir-shopping in “la ville souterraine” before visiting the Chalet de la Montagne at the top of Mount Royale, and a visit to the Oratoire St-Joseph. Your day will end out in the countryside with an all-you-can eat traditional dinner and an evening of French-Canadian music and folklore at an authentic French-Canadian cabane à sucre.

After breakfast, depart on a three-hour ride up the Saint Lawrence River valley for Québec City, the provincial capital of Québec. Begin your Québec City visit with a walking orientation tour in the upper city that will introduce you to Place d’Armes, the Terrasse Dufferin, Notre Dame de Québec Cathedral, Le petit Séminaire de Québec and the magnificent Château Frontenac. After lunch, depart for Parc de la Chutes Montmorency, where you will walk over a footbridge that passes directly over the 275-foot-high falls. Following dinner in Vieux Québec, meet your bus and return to Montréal.

In 1976, Montréal hosted the Summer Olympic Games and this morning, after your group photo, you’ll get to see this beautiful venue with a private tour of the Olympic Stadium and Pools. Next, you will ascend 556 feet on the Funiculaire to the top of the world’s tallest inclined tower for a panoramic, 50-mile view of Montréal, the St. Lawrence Seaway and the surrounding countryside. On a clear day you can see all the way to the Green Mountains of Vermont and the Adirondack Mountains of New York. Have lunch on your own here or back at Place Jacques Cartier before heading home. 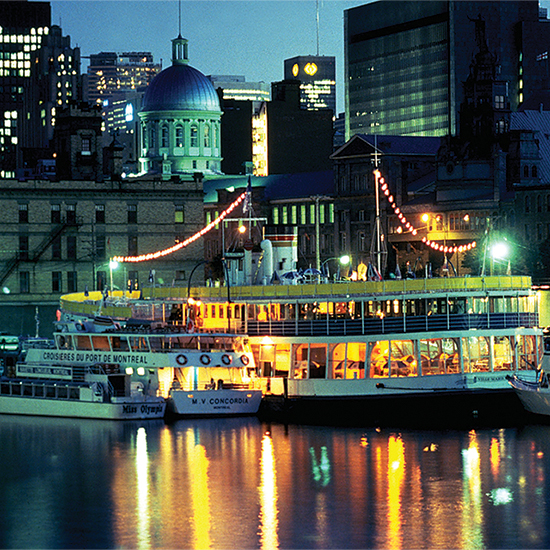 Please contact us for a custom price quote for this trip.